The Indian state of Kerala brings to mind visions of houseboats cruising along waterways but there is even more to it than that. One way to really get under the skin of this serene yet fascinating area is to go and see a Kathakali show in one of the region’s main towns or cities.

Some wonderful places to catch a performance are Kochi (Ernakulam), Kumily (Thekkady), Munnar or Trivandrum (Thiruvananthapuram).

As an art form, Kathakali is over 300 years old, but the incredibly ornate yet flamboyant outfits and the drama of the style mean that it has stayed popular with theatregoers. It originated from the Sanskrit dance of Kutiyattam which was performed in the Hindu temples as part of worship.

Kathakali: A Dance That Tells Stories

The now UNESCO-listed Kathakali is a dance that tells stories and it is considered to be one of the oldest performance styles in the country. 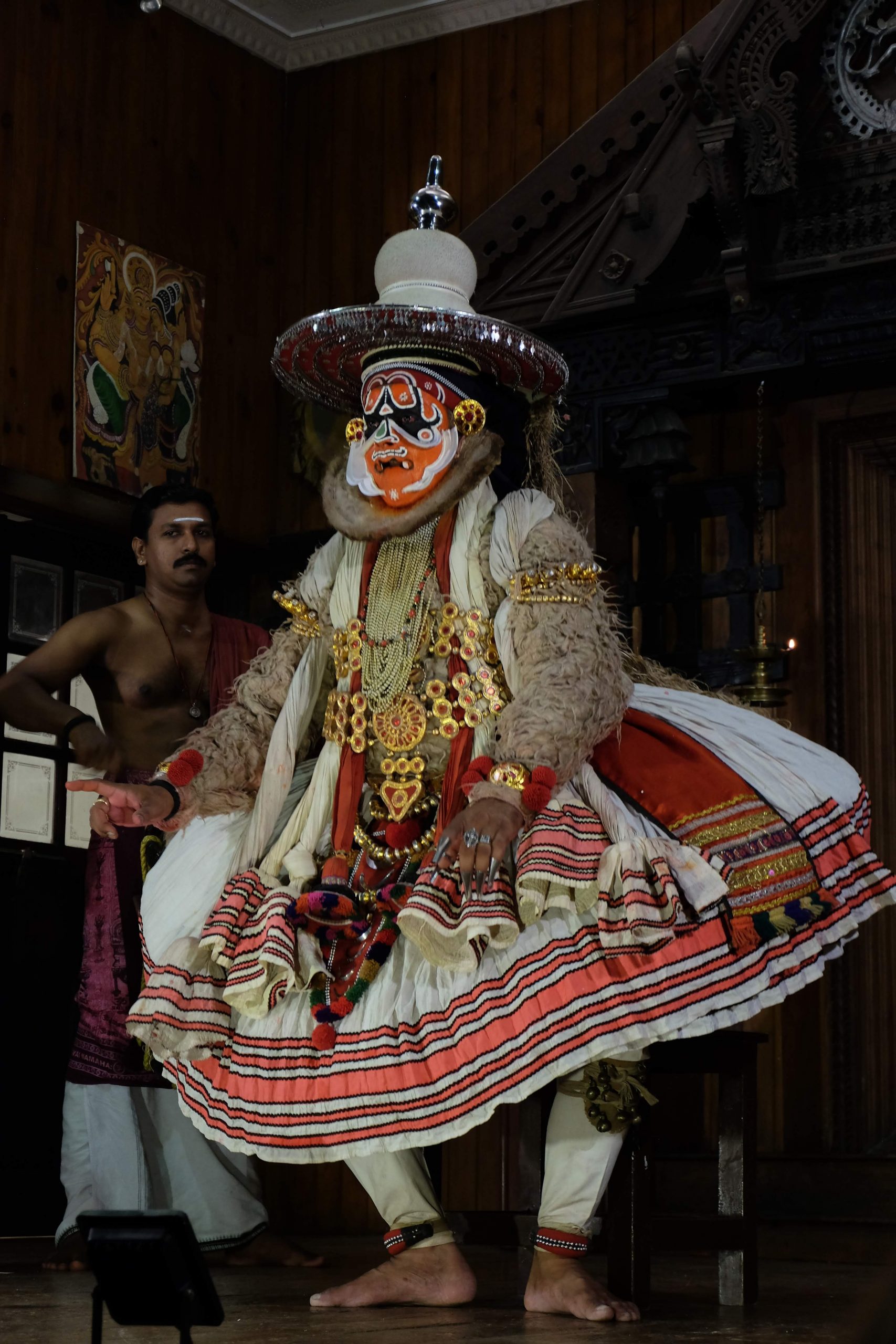 The beauty of going to one of the traditional Kathakali theatres is that you can arrive at the performance early to watch the dancers apply elaborate makeup and take photos. There is so much to put on that they need assistants to help them to glue pieces onto their faces. Sometimes performers even fall asleep as it takes so long.

The makeup they use is called ‘vesham’ and the different mixtures all represent five storytelling themes. Pacha or green denotes nobility, Kathi represents a villain or ‘knife’, thabi is a beard, kari or black shows she-demons and minukku demonstrates that characters are female. There are other types of makeup that are used to show popular characters as well.

The spiritual element of Kathakali means that rangoli (powder patterns) are made and lamps are lit just before the show starts as the association with Hinduism is still strong. If you wanted to, it’s possible to go on different evenings and catch different performances as they change on a nightly basis. 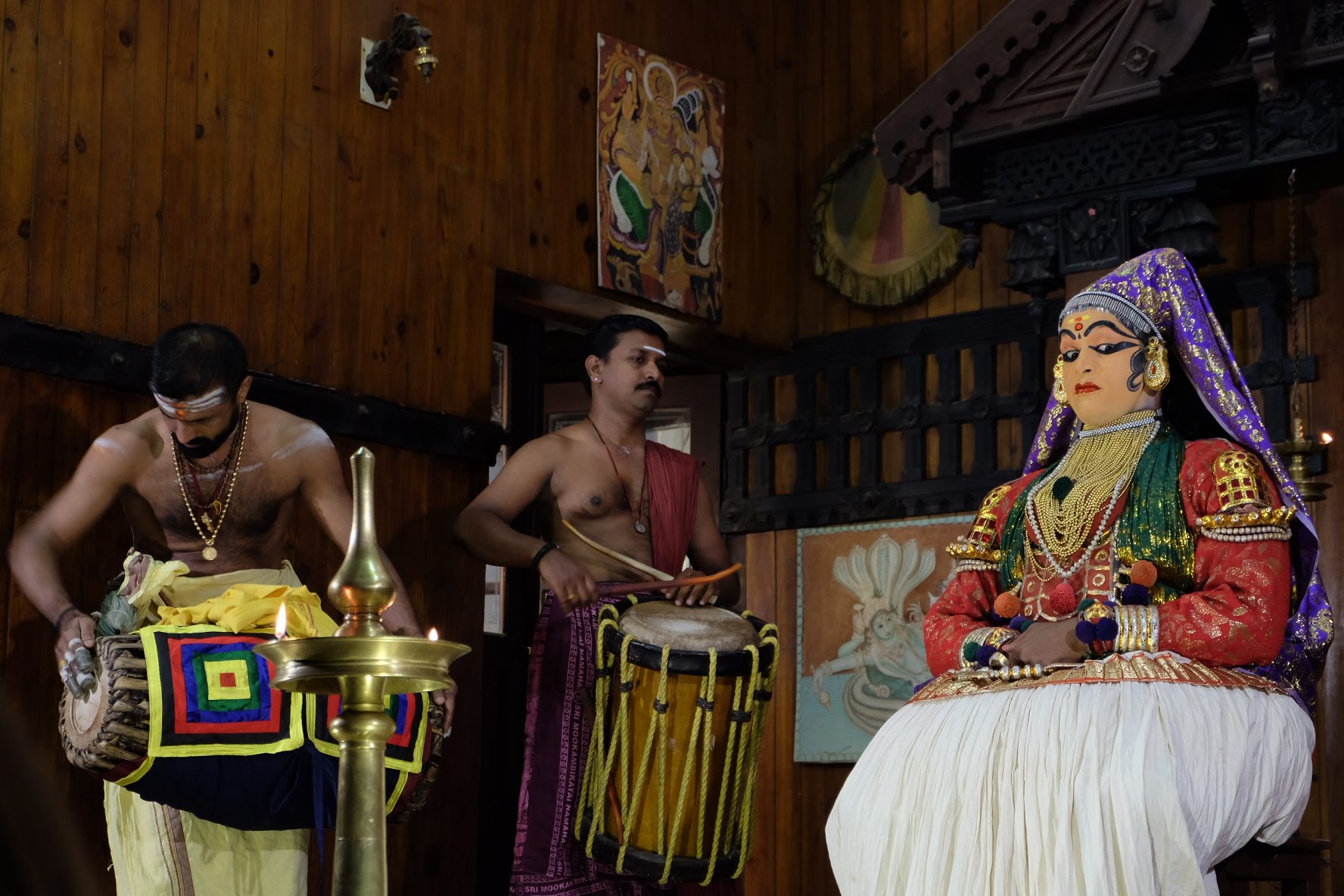 Seeing the actors emerge in their costumes is a sight to behold as they are so impressive just by themselves. They include the kireetam which is the ornate headwear and the kanchukam, the jackets and skirts that are padded to give the characters their larger-than-life appearance.

As you can imagine, it is a tough job for a performer to wear such huge costumes as well as heavy makeup and decoration. Unsurprisingly, this is reflected in their training as Kathakali students have to wake at 3.30 am when they apply ghee (butter) into their eyes to aid their ability to create dramatic expressions.

Not only that, but trainees have to receive guru-shishya massages to keep themselves flexible, combined with a tough exercise schedule and practicing specialized breathing methods. This regime can last for 12 years before practitioners take to the stage.

When the show starts, the actors will dance using mudra, a performed method of sign language. This form of staged communication is based on traditional Hasta Lakshana Deepika gestures. You won’t need to worry about translating it as there is a performer onstage who will act as a narrator.

Members of the audience will receive a programme with more information about the story being told too. Kathakali shows usually last for about an hour, not including makeup. 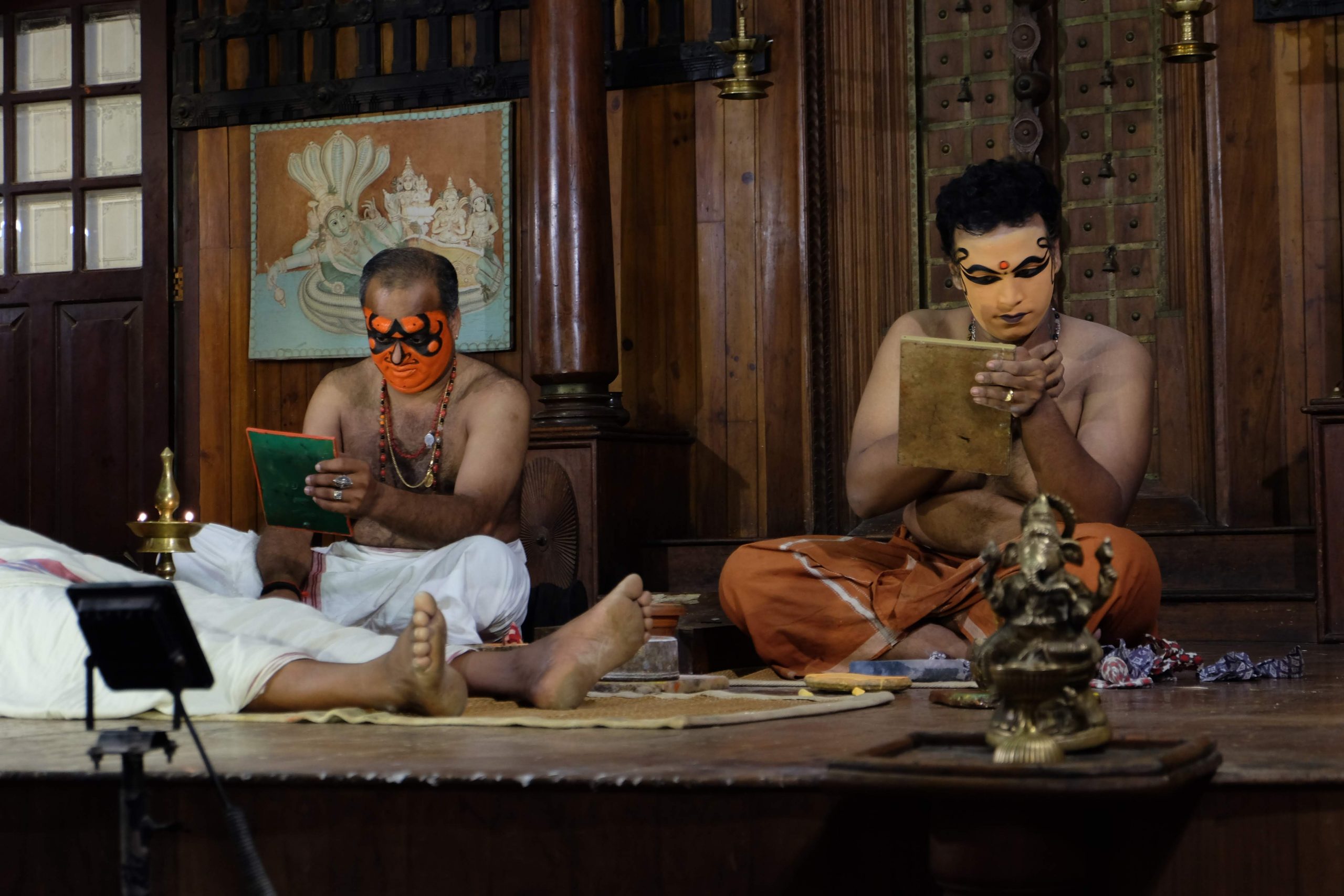 Music is essential to the performance as the characters will move their eyes to the beat of the drum. For added drama, they use Chundappoo (Chanda flower) seeds which irritate the eyes and make the whites look red and angry. The onstage band uses a variety of instruments to create atmosphere, including the maddalam and chenda drums, chengila gong and cymbals (known as ilathalam).

An example of a Kathakali story is a tale like the Mahabharata, which is about Bhima and Panchali, the queen of the Pandavas. This traditional retelling begins when Bhima is asked to bring Panchali a flower which leads him to be tested by Hanuman the monkey god who lives in the forest.

Hanuman decides to help him win a battle and he returns to Panchali with the god’s blessing. At present, all the roles are played by men, even if the characters are female. This is very gradually starting to change but it is a male-dominated art form.

A trip to Kerala is a must for anyone to get to know India and all it has within it. As well as amazing wildlife, historical ruins and stunning landscapes, India’s culture is so worth experiencing on your trip! Kathakali is a classic example of a traditional art form that requires an unreal amount of dedication and stamina to achieve.

It’s impossible to see a show and not be impressed by the tireless work and effort that is behind the makeup, costumes and the storytelling language itself. With performances happening all the time all over Kerala, it is the perfect experience to share with friends.

Author Bio: Jennifer Sizeland is an assistant producer and writer. She has a sustainable travel and lifestyle blog called Land of Size.