Famous for production of limoncello liqueur

The Amalfi Coast is one of the most beautiful and famous places in Italy. It’s a long strip of land that starts a few kilometres south of Sorrento, near Naples, and goes on till Salerno. Known all over the world, this area is an endless succession of authentic natural wonders and lovely small towns bathed by the blue Tyrrhenian Sea.

Both along the rocky coast and inland, there are so many things to do and see that choosing may be difficult. Here are the top destinations and best places to visit in Amalfi Coast. 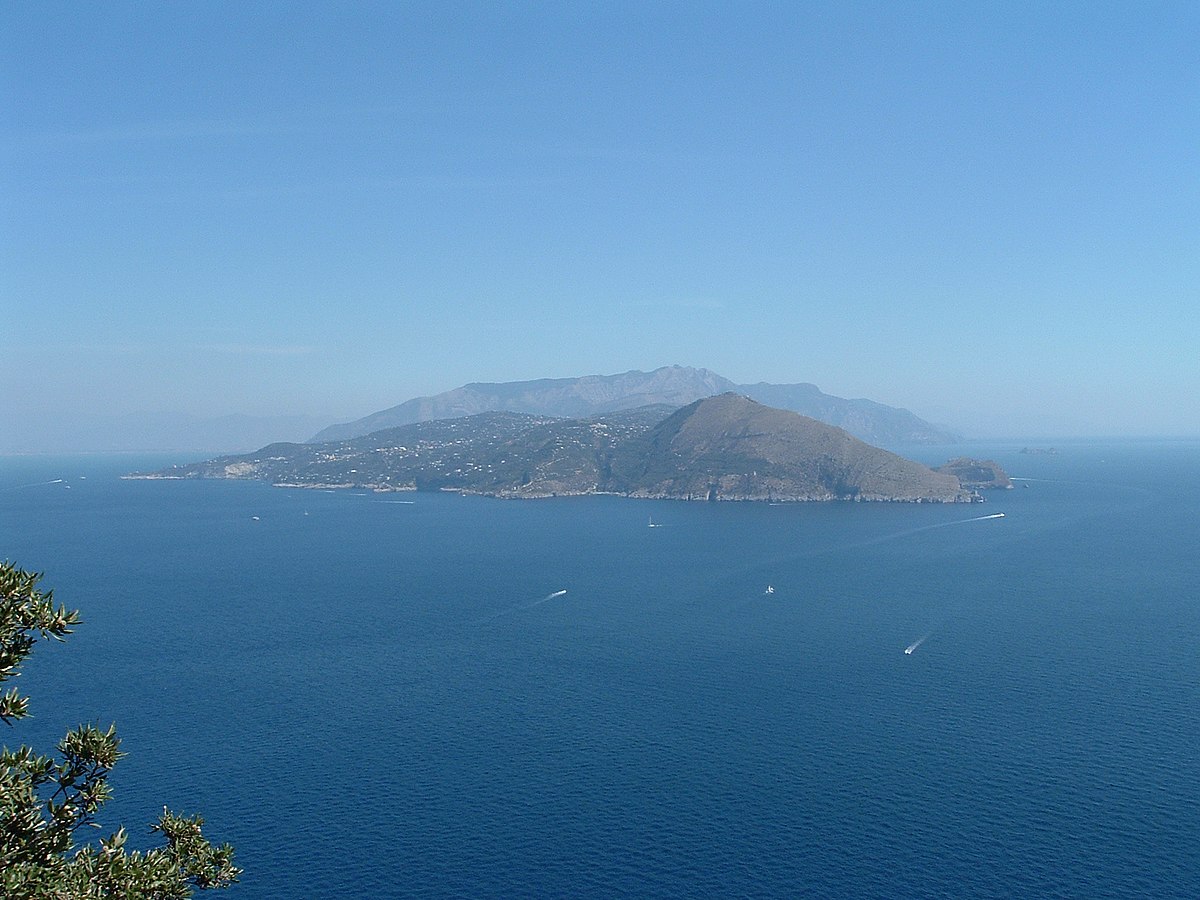 This harsh, sunny promontory overlooking the sea is the southernmost tip of the Gulf of Naples, and is basically the watershed between the latter and the Gulf of Salerno. It can be reached on foot with an easy trek, consisting of a path along which you can enjoy a magnificent panorama.

It’s also a place rich in history and legends. According to many archaeologists, in fact, here the Greeks built a temple sacred to the Goddess Athena, there are ruins of arab and medieval buildings as well, plus an old lighthouse that dates back to the end of the 20th century.

From Punta Campanella Capri is so close that it’s almost as if you can touch it with your hand. The narrow stretch of sea is also the one where, according to legends, Ulysses met the Sirens on his way back to Ithaca. 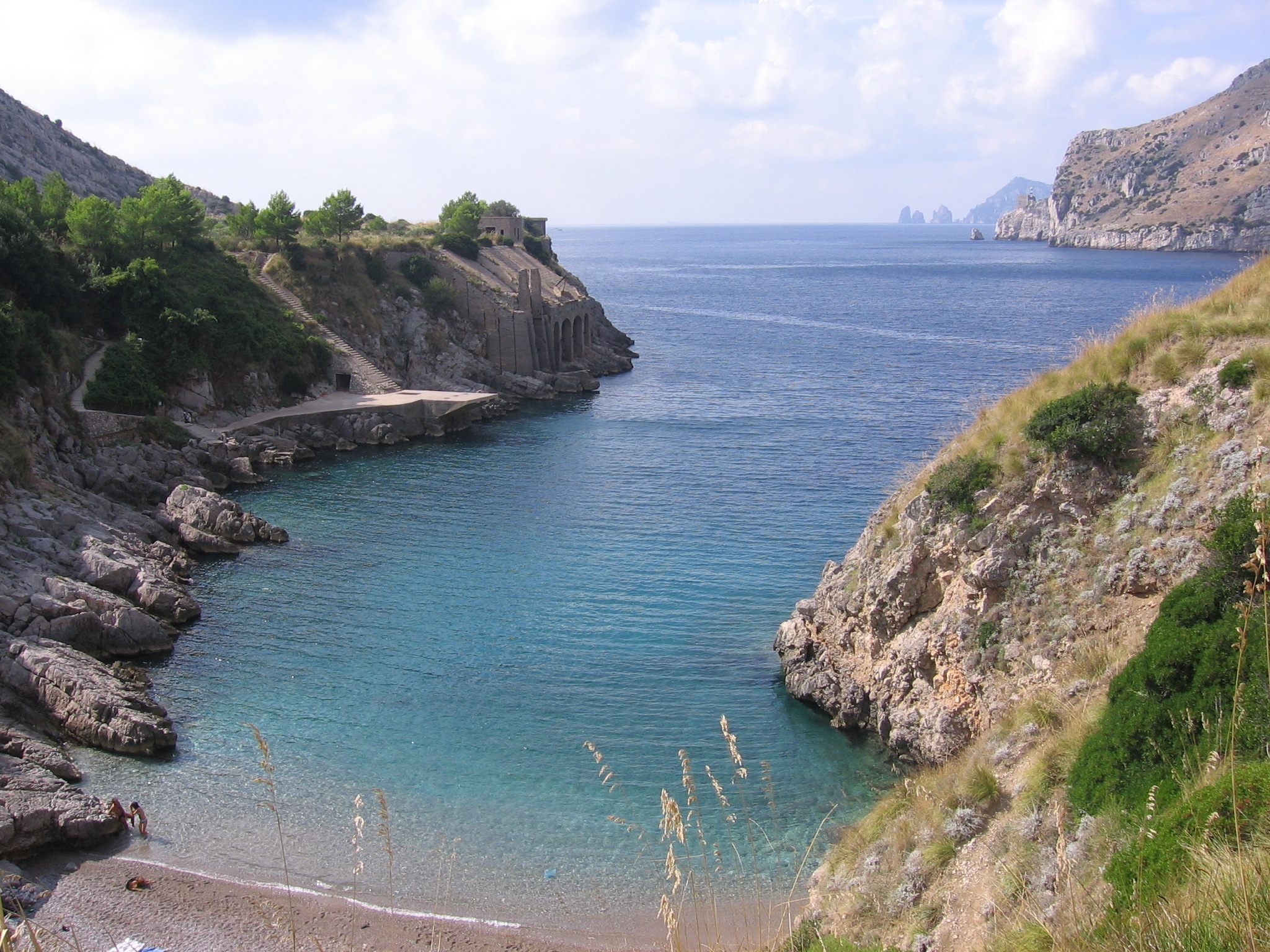 Immediately after Punta della Campanella there is a deep bay of incredible beauty. It can be reached only by land, through a 6 km long path, which is also quite demanding, and starts from the square of the small town of Nerano.

It’s well worth the effort, though, the sea is wonderful and clean, since for several years Ieranto has become a protected marine area and no motor boats can get close to the shore. Due to this fact, it’s not uncommon for dolphins to be seen swimming and playing in the bay. 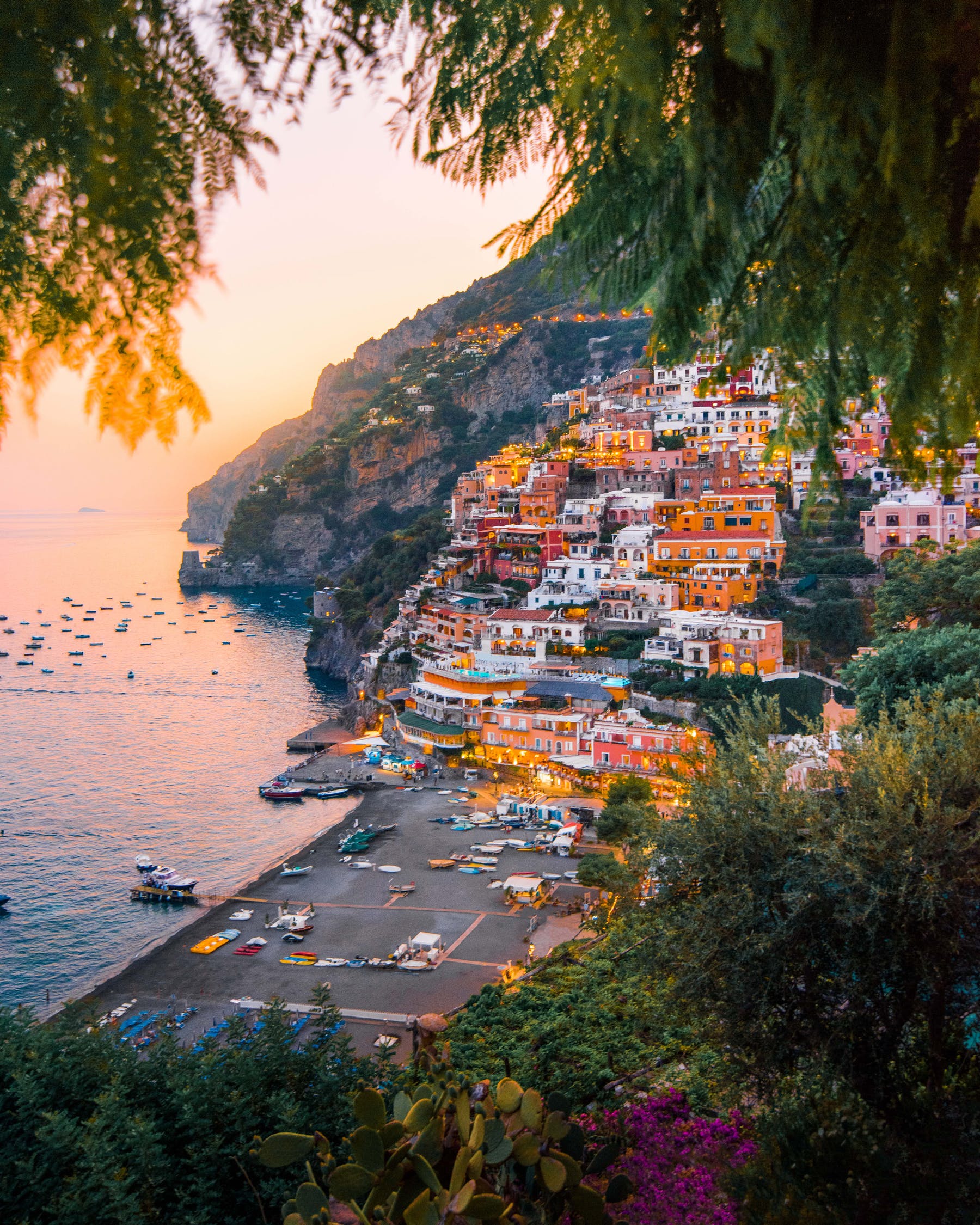 One of the most famous jewels of the Amalfi Coast, this little town is perched on the steep slope of a hill. With small whitewashed houses, beaches bathed by a cobalt blue sea, shops of the most expert craftsmen nestled in a network of narrow alleys, Positano is a place of great charm.

During the summer it’s usually crowded by common people and movie stars as well, but it’ll enchant you every month of the year.

This long path starts from Agerola, a village about 650 meters above sea level, and reaches up to Positano.

If you follow it in this direction, you will go downhill, thus being able to enjoy one of the most beautiful panoramic view in the world without getting too tired.

Its name means God’s Path, and when you’re there you can see why. It’s a unique place of great peace and truly incomparable beauty.

This is a tiny town of more or less 800 inhabitants, made up of houses scattered along the hairpin bends that go up the slope of the mountain to Agerola.

Perhaps it’s less known than other famous destinations of the Amalfi Coast, but it has a peculiarity that makes it unique. Furore is in fact built on a small fjord where you can also swim. A fairly rare scenery in Italy, where fjords are not particularly frequent. 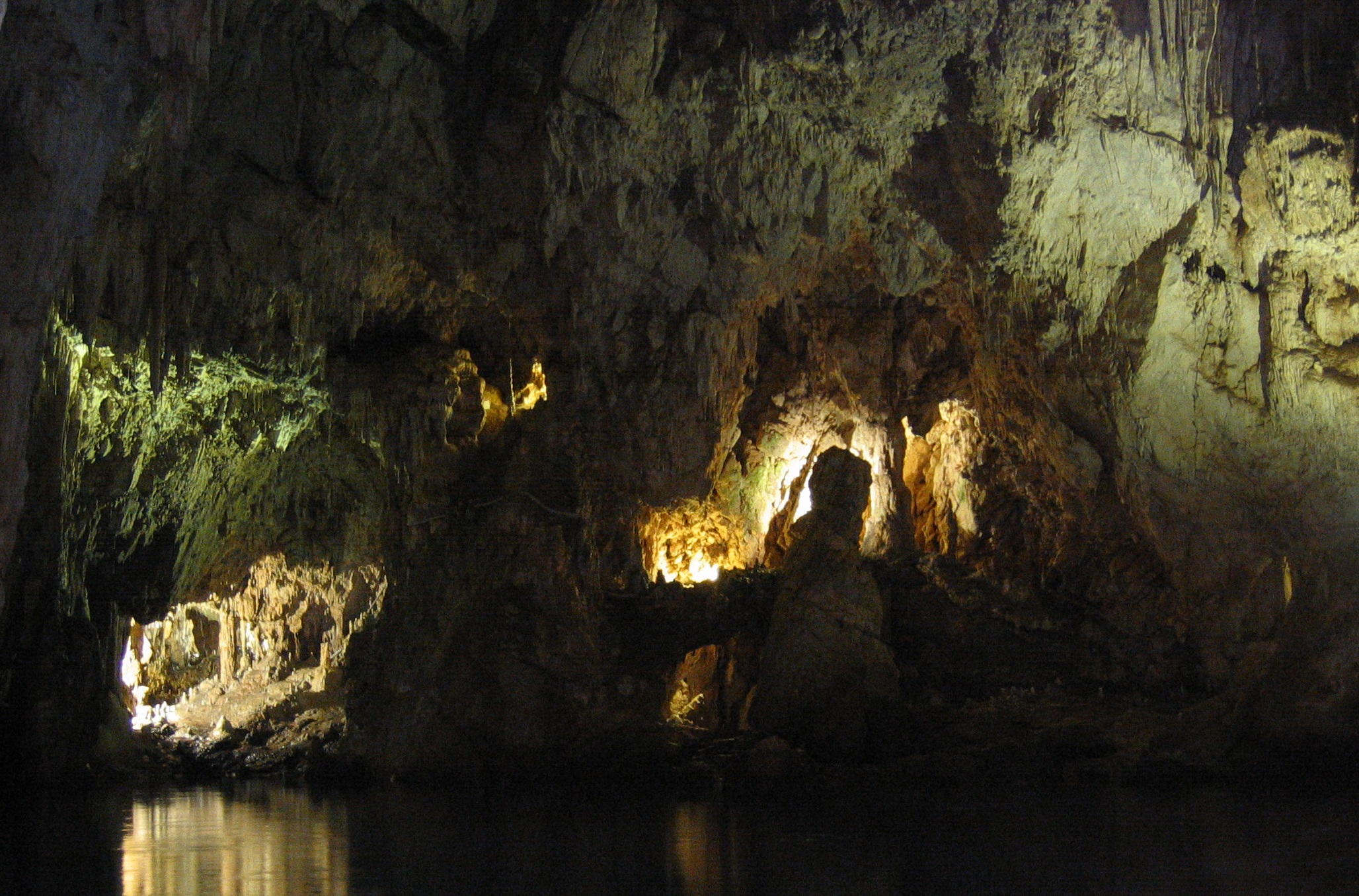 The name of this place, which means Emerald Cave, is due to the natural light effects and water reflections that give the rock walls an amazing green hue.

Also, stalagmites and stalactites create an otherworldly environment that will leave you open-mouthed. You can enter the cave either by taking the elevator on the state road that leads to Amalfi, or by boat.

Here is another famous trekking route, perhaps less known than the God’s Path, but equally fascinating. From the small village of Pontone, near Amalfi, a path starts that runs along an old mule track and which, between breathtaking sceneries, woods and waterfalls, looks like it came straight out of a fairy tale.

The path ends in a staircase that leads back to Amalfi, but along the way there is a small detour that leads to the so-called Integral Reserve, which can be reached by crossing a river by walking on the trunk of an old fallen tree.

The town by the sea that gives the name to the Coast is famous in particular for its wonderful cathedral, an architecture that mixes Romanesque, Arabic and Norman styles to which a beautiful cloister is also attached.

The church dominates Piazza Duomo, the main square, from the top of a steep staircase. Amalfi is also famous for its beaches, even if many of them are not so easy to reach, and for giving birth to Flavio Gioia, known as the inventor of the compass, to whom a monument and a square are dedicated. The paper museum, located inside an ancient water mill, is also noteworthy. 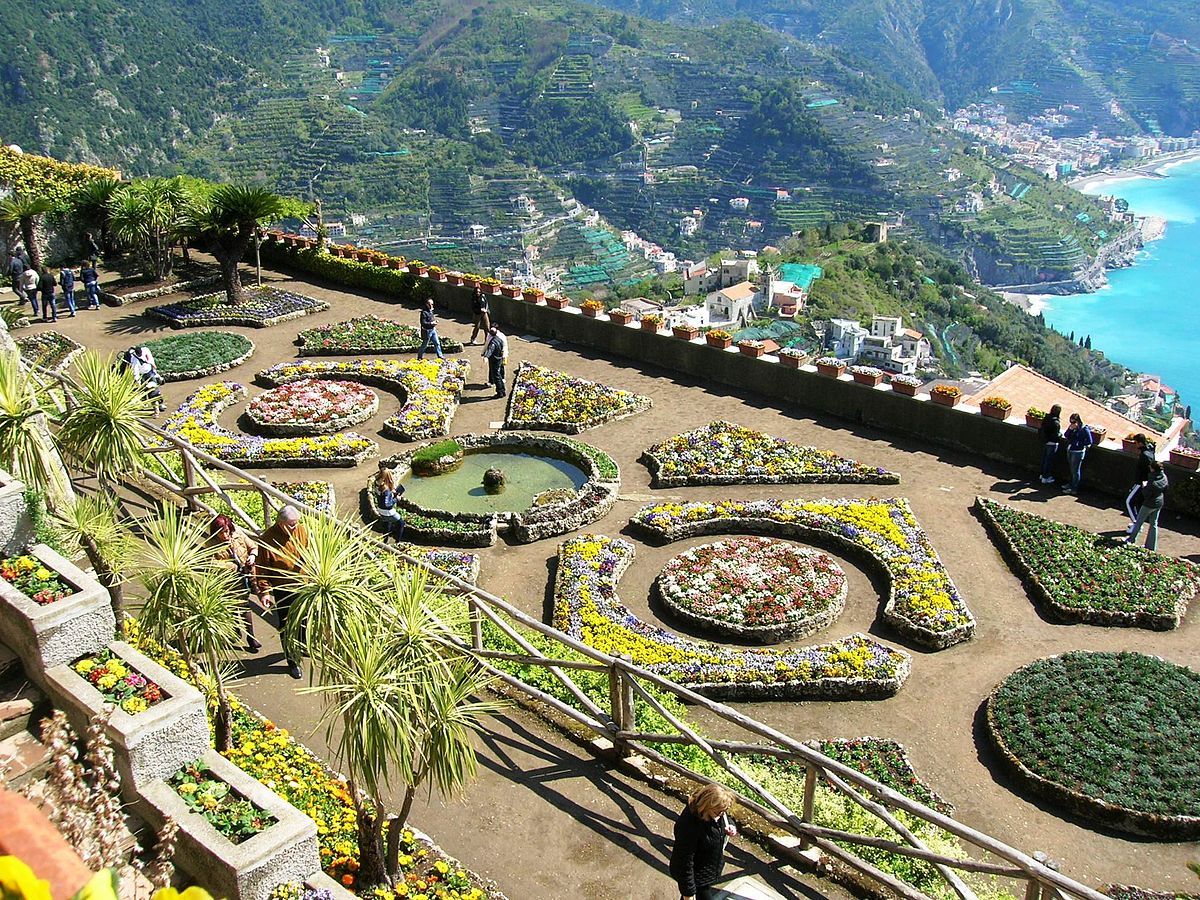 Here is another true gem of the Amalfi Coast. Located quite high, compared to the coast, Ravello is full of breathtaking panoramic views; one in particular is famous in the world, the viewpoint of Villa Cimbrone, also known as the Terrace Towards the Infinite.

The Villa has some spectacular flower gardens as well, just like Villa Rufolo, another of the most important monuments of the city. Ravello is not only beautiful, though, it’s also very lively and among other things it hosts an important classical music festival every year. 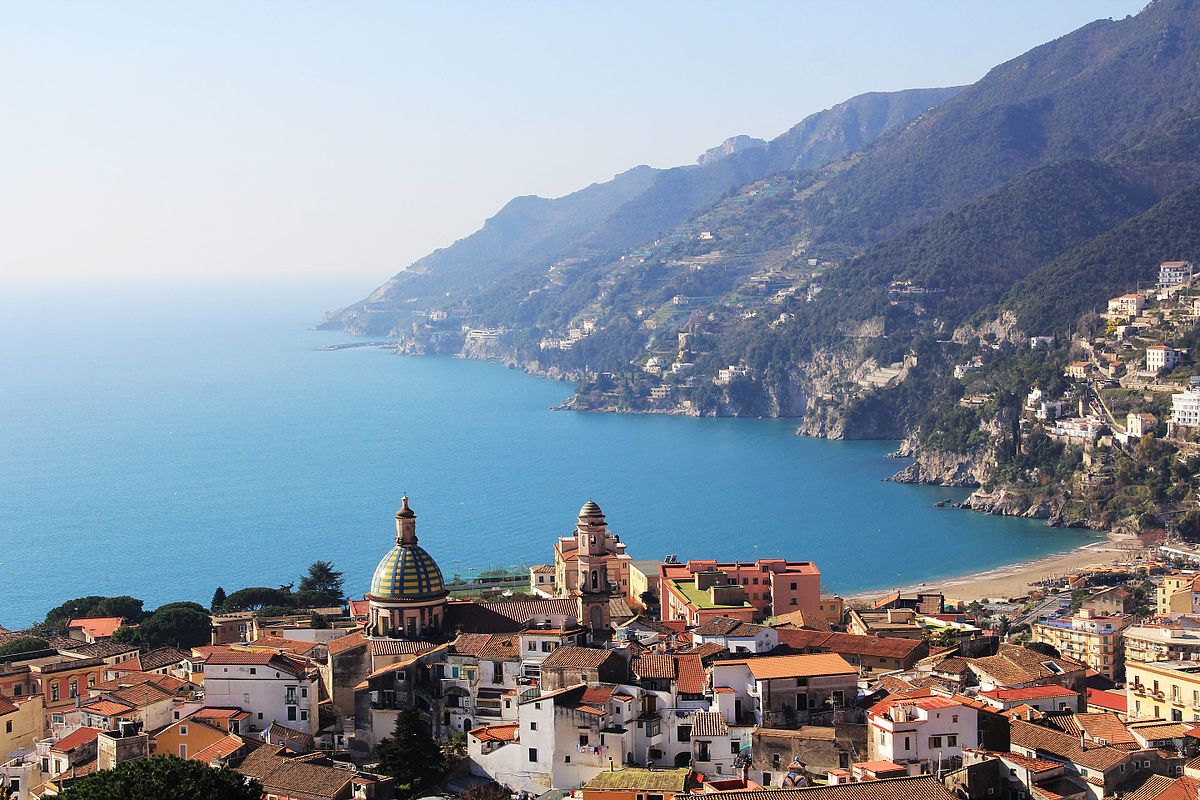 Only six kilometres away from Salerno, here’s where the Amalfi Coast formally ends… or begins. In addition to being a delightful and elegant seaside small town, Vietri is also famous for its artisan shops, where ceramics are produced and painted, entirely by hand, and according to a tradition that has lasted for centuries.

Even the dome of the church of San Giovanni, the main monument of the borough, is entirely covered with dozens of majolica tiles, mostly painted in a tone of yellow typical of the local handicraft, which is also said to be irreproducible anywhere else.

Author Bio: I’m Paola from 40 and it Shows, an Italian woman who loves to travel, alone or not. I graduated in conservation of cultural assets and I’m passionate about art and writing. I love foreign languages, in fact I’m also a Spanish and Russian student. I’m a professional content creator and an amateur painter. Always looking for new experiences, whenever I got the chance I leave my home town to explore the world. To get to know other cultures, with their unique traditions, tales and yummy food is the most fulfilling thing ever. My life goal is to see the whole world! Follow her on Instagram & Facebook.