The present showstopper of world’s tourism is Uzbekistan. It was nowhere in the tourist race until 2011. The bloody history of the Silk Road along with the cultural assortment if ancient cities have contributed a lot in making its name is tourism.

The culture, architecture, and history of Uzbekistan will fascinate you deeply and give you an impressive experience like nothing else.

From the futuristic city of Samarkand to the sprawling city of Tashkent, Uzbekistan holds numerous potential spots. To help you with sorting out your holiday in Uzbekistan, we have shortlisted 10 best places to visit in Uzbekistan.

Best Places to Visit in Uzbekistan 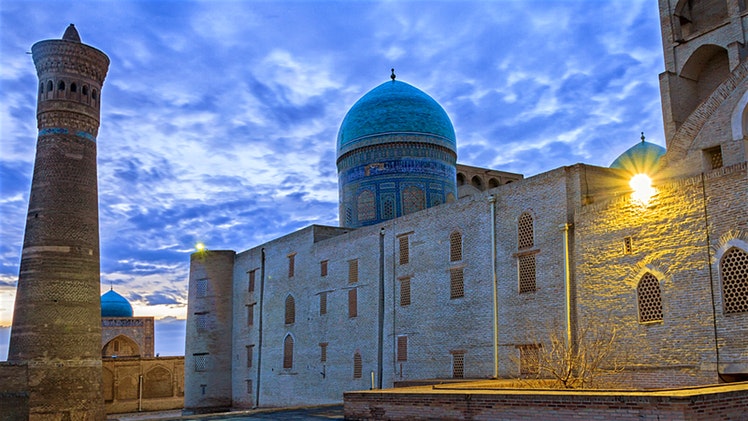 It is the oldest structure up to this date and is one royal town inside another town. Although, it was bombed in 1920 but still reflects royalty of the past.

Equipped with majolica, mosaics and well-proportioned spaces. It is without doubt the most stunning sights in central Asia. It showcases Islamic Architecture and is one of the oldest preserved madrassas.

It is a home for more than 5000 exhibits of heirlooms that represents the culture and history of the Timurid Dynasty. The interesting fact about this museum is that it was deliberately built to mimic Gur-e-Amir Mausoleum.

4# The Walled City of Khiva

Often called Khorasam, this city is approximately 2000 years old. Protected by the crenellated brick wall, you will find many amazing places and monuments. It is suggested to spend a night in Khiva as the old town offers some marvelous views of sunsets and sunrises.

Situated in the northeast of Bukhara, ChorMinar was half built in 18th A rich merchant, Khalif Niyazkul later completed the structure. It is the long-standing symbol of the four cardinal points of geography. You will surely not want to miss the incredible beauty of this Chor Minor.

It is Mausoleum of the 14th century Mongol conqueror. It beautiful structure will fascinate you like nothing else. The dome holds special significance because Timur, his sons and grandsons where all cremated here. A visit during night enhances the beauty of the dome manifold.

A blue domed building, it is known for its traditional market. You will find everything here from clothes to trinkets. Make sure to visit this place.

The last ruler of Kokand Khanate, Khudayar Khan have this place named after him. This palace once housed seven magneficient courtyards and 119 rooms. It was built in the year 1871 and covered 4 acres of green land. It is now left with 19 rooms and two courtyards and is known as ‘the pearl of Kokand’.

It is one of the few remaining ponds in Bukhara. This was built in early 17th It has a face of plaza, surrounded by tall mulberry tress which are still watered by an ancient canal system. There is one historic city of Jewish Quarter situated towards the south of this pond. It is one of the nicest to visit.

It is a semi-natural lake created by the Soviets and at present covers 4000 sq km of the area. It is situated near a smaller seasonal lake amidst the Kyzylkum desert. This place not only a tourist attraction but also offers several things to do during vacations.

Have your next holidays here and explore why has it become the showstoppers in tourism world.